0
was successfully added to your cart.

Does an Interest Rate Increase have you Worried? 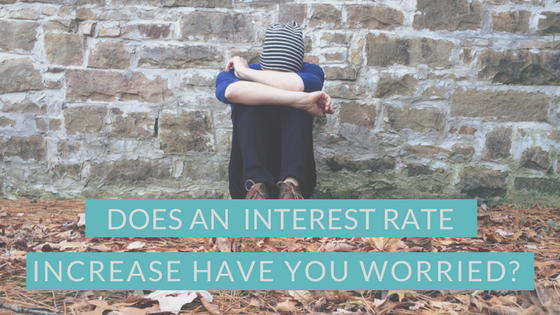 The current talk in the media is that we could be seeing banks increasing the interest rates for home loans.  This could have some huge ramifications for a number of families.  Since the global financial crisis we have increasingly seen that the interest rates have been reducing.

Now there are interest rates beginning with 3% however majority are in the 4% range.

So what would it mean to you if there was a sudden increase in your interest rate?

What would happen if your interest rate increased to 8%?

Would you be able to make your repayments with ease and no worry?

For many this could spark some anxiety and fear of the unknown as well as their affordability of their current life.

I know I was initially very worried when I heard it, as that’s money essentially that I have allocated to other spending or savings. I also worry for the fact that there could be increases in other items that attribute to my general cost of living.

So it may start with the interest rates but it could be a snow ball effect.

Now I don’t want to worry you, I don’t personally see the interest rates jumping that high and quickly.

But I think its great time to get the conversation started about what would you do, if this happens?

The more I think about it the more I see it now as a great opportunity for us all.

The better and more prepared that you are for something its less likely to hit as hard.

Get started today and come up with a plan on how you are going to tackle this for you situation.

Remind yourself that the hard work will be worth it!

Isn’t it time you finally got your money sorted? Learn to Trust Your Money HERE!!